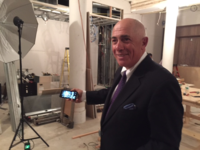 Many artists conceal changes to their work. Process is not always appreciated, and can be misconstrued as flaw. The appearance of an early layer—whether imperfectly erased or deliberate—is called pentimento (see Hellman, Lillian) and some artists hate it. Others revel in the study of development, the steps taken from beginning to end. Michael Namer, the chief executive officer and founder of Alfa Development Group, is among the latter.

Istanbul-born, Havana-escaped, Los Angeles-raised, New York-formed, the 61-year-old West Village resident is today, in his words, a painter by avocation, a developer-builder by vocation. Each layer of his life, his work, his building is as integral as the next.

We’re sitting in a muted model guest room on the seventh floor of the HGU New York, formerly known as the Grand Union Hotel. At 34 East 32nd Street in Manhattan, which should be ready for guests sometime in 2016. Earthy grays, blues and khakis inside deliberately negate the flashing brightness of the city. Mr. Namer, in navy sports coat and tie, stretches his khaki-clad legs, flashing the bright orange soles of his brown suede wingtips.

With seemingly little effort he’s inserted himself in every aspect of his current project. He draws himself in, deriving pleasure from everyone and everything around. On the 10th floor, the top, he found newspapers stuffed into the plaster spread during the 1915 expansion of the 1905 original building. Slowly, he extracted the pages from the wall.

“I’ll show you downstairs,” he said, delighted, describing Vanderbilt headlines and local postcards and art that will fill the 40,000-square-foot hotel, reminding or teaching guests that this place, like the city around it, is rich with history, culture and life. Mr. Namer hopes guests of the hotel and the not-yet-named, recognizable-chef-headed restaurant will be aware of their surroundings. This is New York and nowhere else.

Read complete story on CommercialObserver.com: The Namer of the Game