About Me Journalism Portfolio Communications Consulting Contact
The Best Part of Pokémon Go Is Not What You Think
David Rockwell is Taking on NYC’s Restaurants, Theater and Airports

A Corpse Flower Grows in the Bronx 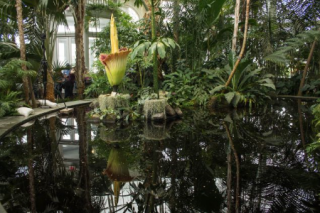 The Corpse Flower at NYBG

The ultimate pop-up happened last week in The Bronx: A giant misshapen phallus bloomed. The spectacle lasted Thursday afternoon to Saturday, and attracted thousands of visitors to the New York Botanical Garden, some seduced by the rarity: The NYBG hasn’t had an erection like this one, growing from 22 inches to more than six feet in 10 days, since 1939.

Some were inspired by the Gilmore Girls trailer: Rory Gilmore searched, and so did they. Most visitors, however, were enticed by the smell. The phallus is part of a titan arum (Amorphophallus titanium), a tropical plant as famous for its gigantism, unpredictability and ephemeral nature as it is for its stench. You probably know it as the corpse flower, so called for its famed malodor, said to mimic that of rotting flesh.

Read complete story at Observer.com: The Big Stink: A Corpse Flower Grows in the Bronx