David Rockwell is Taking on NYC’s Restaurants, Theater and Airports 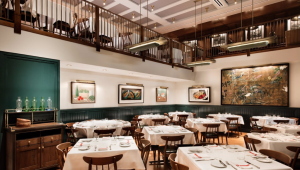 When David Rockwell was 12 he crossed the Hudson River with his family, ate at Schrafft’s, saw Fiddler on the Roof at the Majestic and fell in love with New York City—all in one day. Today, so many of us who share the sentiment have Rockwell himself to thank.

The designer’s handprint is everywhere from The Children’s Hospital at Montefiore in the Bronx to JetBlue’s JFK Terminal 5 marketplace in Queens to Imagination Playground at Betsy Head Park in Brooklyn to FAO Schwarz to Broadway (did you know he won a Tony?) to, most recently, the new Union Square Cafe.